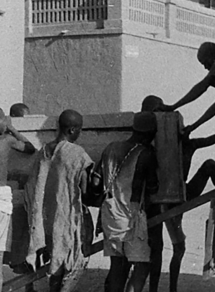 The Dakar – Djibouti Mission: The Spoils of Mankind

Four ethnographers led by Marcel Griaulefrom the Paris Museum of Mankindtravel on a famous/infamous expedition from west to east across 1930’s Africa, with the express idea of gathering traditional artifacts from the supposedly ‘dying cultures they encounter en route. Thus they rationalise the buying and stealing of the people’s sacred objects for exhibit back in Europe, and in the process denigrate these cultures. It would be easy for the filmmaker to condemn the ethnographers from our more enlightened global perspective a few generations later, but he doesn’t do this and the film is more interesting for it: there are glimpses that these men, although a product of their time, do actually question themselves, that they can sometimes be more than just callous, self-indulge criminals from an entitled era indulging in an exercise of cultural expropriation. Unique black-and-white footage of people and places taken by the ethnographers themselves between 1931-33 intensify the sadness and disrespect of their actions. The film informs a timely global discussion about the repatriation of many stolen objects to Africa.