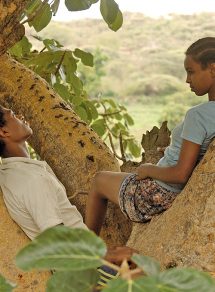 During the Ethiopian civil war, a Jewish teenager struggles to keep her beloved Christian boyfriend from being drafted, as she resists the pressure of leaving with her family to go to Israel without him. Set at a traumatic time in Ethiopia’s history, the film poses questions integral to the current international immigration debate: When war breaks out, who gets to flee and who is left with nowhere to run? Played with great charm and charisma by two hitherto unknown teenage actors.