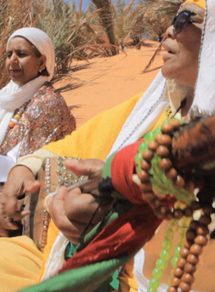 Old women play Rock ‘n Roll! In the last 40 years, the pioneering Hasna elBecharia has brought about a small revolution in Algerian traditional Gnawa music. Originally the preserve of the men of the Gnawa culture of ex-southern slaves in Algeria, Gnawa has been taken over by women, led by the indomitable 60-somethingHasna. The documentary traces her career from her musical origins as a child as she struggles to learn Gnawa music against the wishes of her musician father, to her liberation at the Cabaret Sauvage in Paris. There she finds the freedom to play what she wants, a combination of Trance Music and Rock ‘n Roll. Hasna is a ‘big’ character, humble, generous to those in need, and religious in her own way. Back in Algeria and now in the later years of stardom, she sets an example of peace, strength, and confidence for other women to follow in her path.