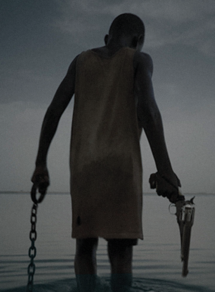 “Revenge is like a river whose bottom is reached only when we drown”. Crime thriller, horror, and fantasy, this film whizzes through a fast-paced tale of the three ‘Bangui Hyenas’, a group of mercenaries come to take their revenge on a sinister opponent who has wronged the main Hyena, Chaka, years earlier. The trio- of almost mythical reputation -really did exist. They were to be found in West African political hotspots in the early2,000’swheretales of their exploits were supposedly told around the campfires at night to inspire child soldiers high on crack, and although Saloum is a fictional work, this is the ambiance they inhabit. The action begins when the Hyenas are commissioned to extract a Mexican drug lord from a coup in Guinea-Bissau and fly him to safety in Dakar. However, their plane is forced to land in Saloum, a desolate coastal area (beautifully filmed) of southern Senegal, which is said to be a sacred and protected place, cursed by its original people, the Diolas, in revenge for past crimes against them. They soon come across Omar, the supposed manager of an eco-tourist village, who turns out to be far more than he seems. With brilliant dialogue, memorable characters, and wit, the story crazily propels the Hyenas deeper into chaos and darkness.  Themes centre around revenge and its evils, without forgetting contemporary themes of the abuse of child soldiers and environmental exploitation. There is no forgiveness, but in the process of descent, there is unexpected solidarity.