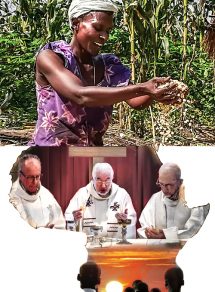 Women Hold Up the Sky + The Cemetery Of Elephants

Women Hold Up the Sky
In the world of mining and big dam construction, women are the first to be affected by the pollution, loss of land and displacement. This is the story of women in Congo DR, Uganda and South Africa standing up for their rights against the multinationals destroying their environment and livelihood. Journeying between these three countries, the documentary reveals the experiences and activism of women in three African countries but tells a much bigger story of the ongoing exploitation of natural resources and marginalisation of poor communities, particularly women.

The Cemetery Of Elephants
The closed universe of a retirement home in France, referred to as “The Elephants cemetery”, is home to about thirty boarders, retired priests, including Father François de Gaulle, the nephew of General De Gaulle. In this Burkanibe
documentary, we share the daily lives of these former missionaries, named “Pères blanc (White Fathers)” by the West Africans whom they settled amongst to transmit the vision of the Catholic Church and convince many Africans to forgo their own religious practices for theirs. The director, a young woman whose village was evangelised in the colonial period comes to ask the “White Fathers” about their mission and their role in the colonisation of Africa in attempt to understand their lives and motivations.
“This story is about my meeting with this retirement home, my meeting with Father De Gaulle whom I met in Koudougou, who saw me grow up and who I later found in the twilight of his life. This story is personal, and many Africans will find themselves within my approach of telling this story because I know that many like me, today, Ask themselves the same questions.”