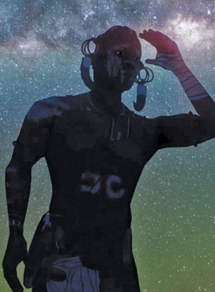 The Africologist: Chronicles of Africa

Traditional storyteller and filmmaker Valerio Lopes, from Cape Verde, has created this highly original, a futuristic documentary on African history, science, and technology. Using both traditional story-telling in its role as a carrier of culture, tradition, and belief, computer graphics, and the results of his own research from the 16 African countries he has visited, Lopes chronicles the story of Africa, past, present, and future. His guides are the Africologist, a computer-generated fictional woman who is on a quest to discover Africa’s truths, and Lopes himself, delivering his insights as he has researched them to the camera. The question they pose together is, “What was, is, and will be the role of Africa and its people in the world, generation after generation?” (Lopes). To cover such an enormous and complex subject in just over an hour of footage, the narration is dense, carefully scripted, and often very fast-paced. The work is challenging, and fascinating. Valerio makes a case for Africology as a discipline for studying the entire history and human evolution of Africa, given its relevance to humanity. “What our ancestors did is the mirror of our consciousness.”(Lopes)