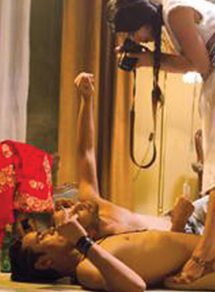 Of Skin and Men

Amel (Hafsia Herzi), a young photographer, has just lost her husband Nabil in an accident. Her happiness, living with her beloved husband in a beautiful family apartment, has turned to grief. Her father-in-law, Taïeb, encourages her to re-engage herself in her photography and she begins shooting a series of erotic scenes of male. Amel truly immerses herself in her work – she’s fearless and unafraid of scandal and chooses to look at men in the same way as men look at women.Nevertheless, she’s troubled by Rabah, one of ‘the men of the street’, while she finds Sami, a young intellectual and co-worker, quite seductive. Meanwhile,Taïeb’s affection and attention  have become stifling…