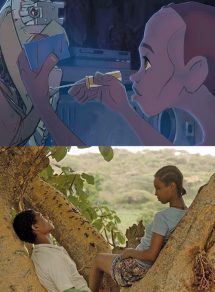 Obsolescence
In an electronic garbage dump in Africa, there is still a child who hopes to restore the splendour of the past to his village. An elderly witch with whom he lives will help him to achieve it through a small seed, triggering a series of events that interconnect past and present, revealing to the child the reasons for the decline of his tribe and showing him the keys to recover the lost balance. Maybe it is too late! Because the harsh reality is forced upon with increasing force. Even though the child and the elderly woman will not give up, the memory of their lost world will impel them to keep trying.

Fig Tree
During the Ethiopian civil war, a Jewish teenager struggles to keep her beloved Christian boyfriend from being drafted, as she resists the pressure of leaving with her family to go to Israel without him. Set at a traumatic time in Ethiopia’s history, the film poses questions integral to the current international immigration debate: When war breaks out, who gets to flee and who is left with nowhere to run? Played with great charm and charisma by two hitherto unknown teenage actors.