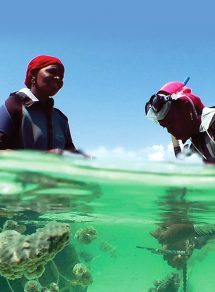 The ocean covers the major part of our planet, accommodating a quarter of all known species, influencing our climate and offering a coastal habitat for half of the world’s population – and despite this, we are destroying it. The overuse of the ocean leads to the destruction of the ecological balance. Simultaneously the coastal populations of the world lose their source of income. This has a catastrophic impact on the short and long term. But is it still possible to find an alternative to intensive exploitation of marine resources? In Zanzibar, the local fi \shing community of Jambiani is trying to preserve the biodiversity of the ocean’s fauna.