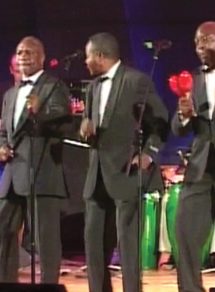 Rumba, also known as Gumba, meaning ‘belly button to belly button’ is a famous musical rhythm in Africa and Latin Africa. “Sur le chemin de la Rumba” is a Congolese film tracing Rumba’s musical history through Africa, Latin America and the Caribbean, and thence back to Africa. It takes the audience on an exquisitely filmed journey along the coast from the Congo to Cuba, Ecuador, and Ivory Coast in a trip drenched in well-known musical notes,
all the while melding this African musical art with the images and rhythms of the beautiful Congo basin, the source that gave it its shape and soul.