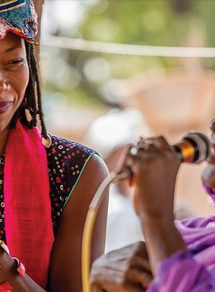 We are sick, we are psychopaths, we need music,” declares Fatoumata Diawara, one of the four renowned Malian musicians featured in this documentary. Combining wonderful concert footage with moving portraits of artists determined to make music no matter what the risk, Mali Blues should appeal both to world music fans and anyone interested in the increasing tensions between secular and religious forces in Africa. The musicians are Diawara, a singer-guitarist who may be familiar to moviegoers, thanks to her starring role in Abderrahmane Sissako’s acclaimed 2014 drama Timbuktu; Bassekou Kouyate, a Grammy-nominated musician and griot who plays the ngoni, rigged up to produce a psychedelic sound; Master Soumy, a rapper whose politically charged lyrics directly comment on the fundamentalists’ distortion of Islam (“Murder and torture/Explain your Islam/Before you forbid me laughing/Explain your Islam”); and Ahmed Ag Kaedi, a Tuareg guitar virtuoso who had his equipment destroyed by Islamists when they took over his hometown and threatened to cut off his fi ngers should he resume playing.