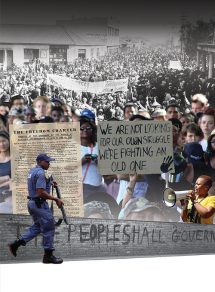 Freedom is Not Free

Since its adoption in June 1955 by the Congress movement, the Freedom Charter has been the key political document that acted as a beacon and source of inspiration in the liberation struggle against Apartheid. It was reputedly the main source that informed democratic South Africa’s liberal constitution and a constant reference point for the ruling African National Congress (ANC) and rival political parties that it spawned since 1994, all claiming the Freedom Charter’s legacy. Freedom isn’t Free assesses the history and role of the charter, especially in relation to key political and socio-economic aspects of developments in South Africa up to the present period. It includes rare archival footage with interviews of a cross-section of outspoken influential South Africans.