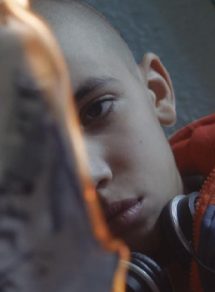 With his mother in prison and nowhere to go except a welfare home, Benjamin, thirteen, insists on living with his unknown father, Karim, who, as he says bluntly to his grandfather, “had sex with my mother”. Karim still lives in the home of his parents, a family already traumatised by displacement and personal tragedy. They find themselves defenseless before this insolent and impulsive teenager who will change their lives forever. A surprising and beautifully realised film, which won the top prize at 2015’s FESPACO film festival in Burkina Faso, beating competition that included the Oscar-nominated “Timbuktu”.