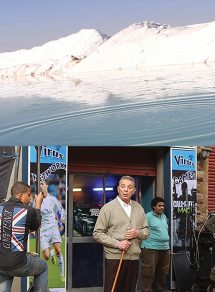 Dream of Salt
A dream can’t be seen by the eyes as it resides in the world of imagination Nabil Herbawy’s dream lit up his sightless eyes to allow him to illuminate the dreamers’ lives.

Photocopy
In a way, Mahmoud’s life is a ‘photocopy’ of millions of others: He has worked for 30 years in the same government job, as a data-entry typist for the State-owned newspaper. He has never married, and he’s never even been with a woman. When he settles for early retirement, he buys a nearby Storefront and sets up shop: “Mahmoud’s Photocopy.” One day, a schoolboy comes in and asks him to type up a report on the extinction of dinosaurs. Mahmoud can’t help but begin to see some strange parallels with the state of his own life. Driven by a desire to change the depressing reality that his own lifestyle is becoming extinct, he starts a journey that leads him to revolt against everything he is accustomed to: routine, tidiness, predictability- he abandons his comfort zone. Fate meets his new-found courage with challenges, fights, and struggles until he meets his biggest fear—falling-in-love, and jumps in wholeheartedly.
“I really enjoyed this heart-touching film. It provided me a glance of classical Egypt in twentieth-century mixed with human feelings. It teaches us that our ability to enjoy life can’t get extinct. The actor’s performance was great, especially of Mahmoud Hemeida.” MICHAEL WJFE