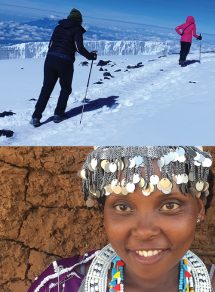 Climb with Remi: Kilimanjaro for IDPs
In an attempt to get the public to care, four Nigerian women take on a symbolic adventure to the summit of Mount Kilimanjaro to raise awareness for the plight of millions of women and children living in deplorable conditions in camps set up for Internally Displaced Persons (IDPs) children who have lost their homes and families due to the activities of terrorists in North-East Nigeria.

Maasai Remix
Maasai Remix follows three Maasai individuals who in different settings – the United Nations, a Tanzanian village, and an American university – face challenges to their community by drawing strength from local traditions, modifying them when necessary, and melding them with new resources.