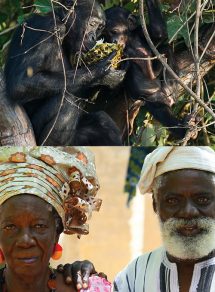 Back into the Wild + Duga, The Scavengers

Back into the Wild
A troop of 14 bonobos is on the verge of being released into the forests of the Democratic Republic of Congo. The Congolese conservation group Amis des Bonobos du Congo (ABC) is working to make sure the communities surrounding the release site feel invested in the project. This will be the second group to be reintroduced into the Congo Basin forests after being trafficked or born in captivity. Before they are released, they will have to relearn how to feed themselves so they can survive on their own in the wild.

Duga, The Scavengers
Duga or Vultures are birds that live off dead animals. This film is about modern Burkinabe society where everyone is on the make like the vultures; and Animists, Muslims, and Christians are all entrenched in their own practices. The film rejects this religious sectarianism. Good friendships can be forever!