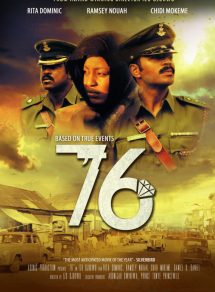 Nigeria’s middle belt, 1976. Respected army officer Captain Joseph Dewa and his wife, Suzy, who is from the south eastern part of Nigeria, eagerly anticipate their first child. Suzy’s family adamantly disapproves of her intercultural marriage. At the same time, rebellious soldiers on Joseph’s base attempt to recruit him into a coup plot to assassinate General Murtala Mohammed, a key player in Nigeria’s Civil War. Joseph resists but the plotters are cunning, setting a trap for him and creating barriers of secrecy between him and Suzy. It’s not long before Joseph is arrested, isolating him from his military brothers and his own family. Tackling a still-contested chapter in Nigeria’s history, Ojukwu weaves together themes of political and personal loyalty, telling the story from the dual perspectives of the betrayed soldier and his anguished wife. Though it recounts serious recent history, 76 delivers great pleasures as well. The warm, saturated cinematography perfectly captures the period, and the soundtrack of ’70s music — both Nigerian and American — beautifully sets the tone.